In 11-12 November 2016 I successfully setup a newly purchased refurbished Lenovo ThinkPad T420 laptop with Ubuntu 16.04 Xenial Xerus (Desktop edition, 64 bit). It was purchased on 10 November 2016 from the Microcenter at Cambridge MA for 330 USD. The store website listed the product with these hardware specifications … whereas Lenovo Support itself provides these rather more detailed hardware specifications.

The machine came pre-installed with an accursed "operating system" (Wi...ws 7) from which I liberated it by wiping clean the harddisk when I installed Xenial Xerus. That is, Xerus was not installed alongside the abomination but purged it and completely replaced it.

In what follows I am not going to describe all the different approaches, tests and paths I took / tried but rather I will present the streamlined series of steps (after lessons learned) that should apply for the next purchase.

It also seems that in the context of this effort I came across this much more rudimentary guide, which I think I didn't use much (if at all). Also, I think I don't use the NVIDIA graphics drivers at all and all related attempts in the past (with this and other laptops) failed and had sometimes disastrous effects (i.e. forcing me to wipe the system and re-install everything).

Before wiping clean the Windows OS / malware with which your computer can pre-installed be sure to run any diagnostic tests supplied by the manufacturer in case they are only provided for Windows. In my particular case there were some battery diagnostics which I neglected to run before formatting the drive and so I relied on Linux battery diagnostics.

In the afore-mentioned machine F1 takes you to the BIOS and F12 directly to the boot order menu (which you should use to boot from the USB flash drive). I had to ask to find out. USB Creator is another option but see in this note why you're better off using UNetbootin instead.
If, after you've created a couple of live Ubuntu USB flash drives, you are unsure which version is each one do a: … to find out (source). Assuming you created your Live Ubuntu USB flash drive using UNetbootin — and that you've read the caveat on this note — you should be able to run the memory test diagnostic. If all goes well you should see a screen similar to this: 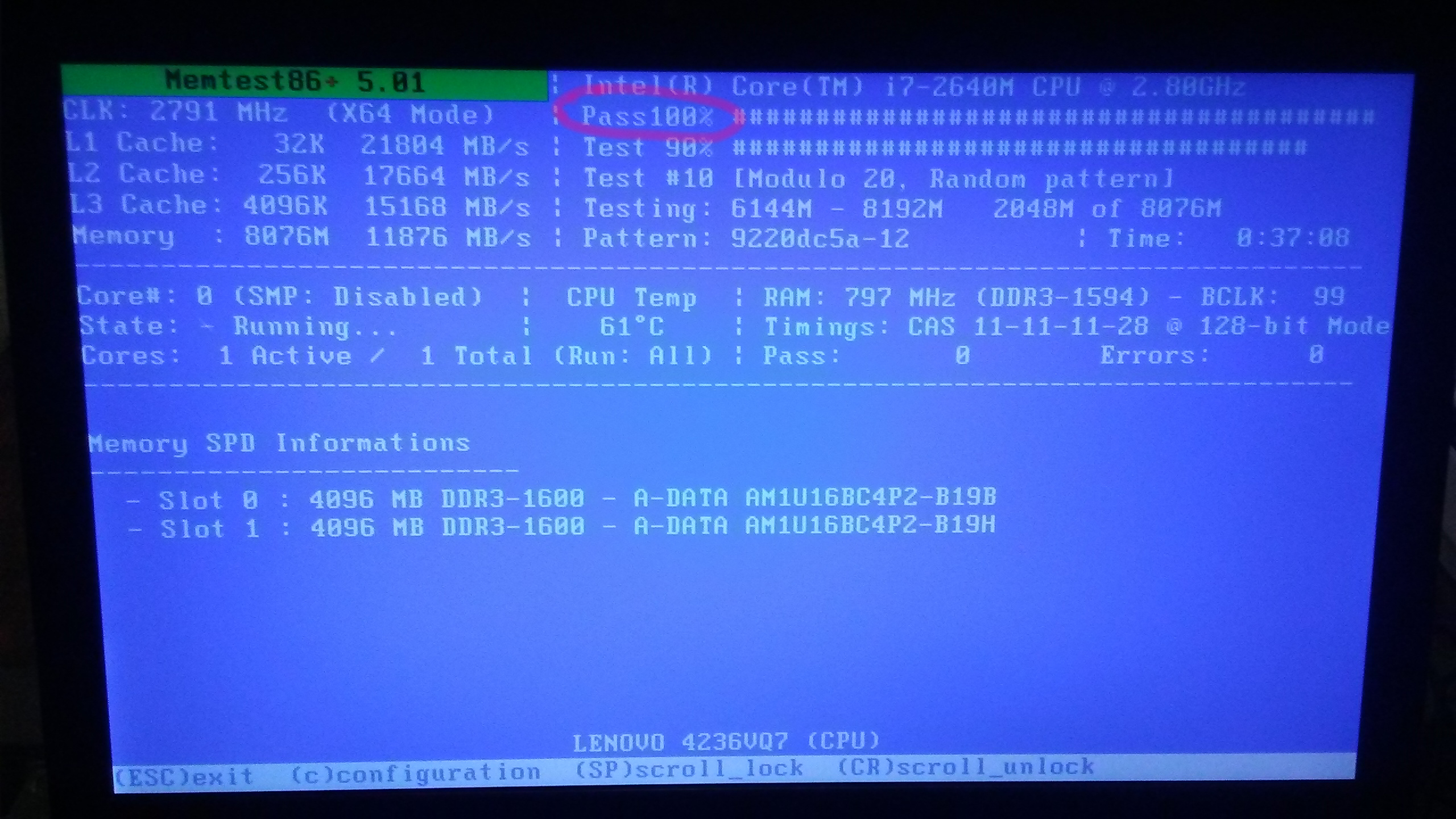 … once the "Pass" variable reaches past 100% it will go back to 0% and repeat the test (at which point you can press ESC to exit the test).

Here's a relevant Ask Ubuntu answer (to which I have commented).

Here's another Ask Ubuntu thread that also mentions (in this answer — to which I have also commented) the memtester program (sudo apt-get install memtester). I used that as well but it's not practical (or even outright impossible) to scan using memtester the entire memory as the system becomes very unresponsive (with all memory being locked by memtester to perform the test). Whereas the memory test of UNetbootin is run before loading the operating system and any user programs so there the responsivity point is moot. In general, I think it makes sense to use memtester only when trying to check a particular area of memory (though I haven't tried that).

I wish I could say that that was entirely incident-free but I think that at some point I was unable to boot from the USB flash drive (consistently thankfully, it was not random) and I had to bookmark this solution but I am not sure at the moment when that was while trying to boot 16.04 or some older LTS versions (14.04, 12.04) which I also tried. … test the wired card too if you have a network and cable handy.

Once you login for the first time you should check the output of the boot process (which is usually available for you to inspect in /var/logs/dmesg or just by using the dmesg command). You should also examine the various system logs in /var/log (the most important of which is kern.log and syslog) for anything that might look weird and investigate further. Note in this connection that in my Ubuntu 16.04 system syslog appears to be a clean superset of kern.log (see my comment on this answer).

… or use -E "error|crit|emerg|alarm|warning" if you want to investigate warnings too. The various codes are apparently related to the arguments used in syslog API: This being said, the output is hard to decipher and it's not clear how many of the messages displayed really require action on your behalf. Here's the most relevant Ask Ubuntu answer on this topic.

Visually inspecting the boot process output (which is available in the kernel ring buffer for you to inspect with dmesg provided clues which were more actionable and worthwhile to follow in my experience. Using this method I handled the following cases:

A more visually reassuring output can be produced with the disks Unity program (use as gnome-disks from a terimal): 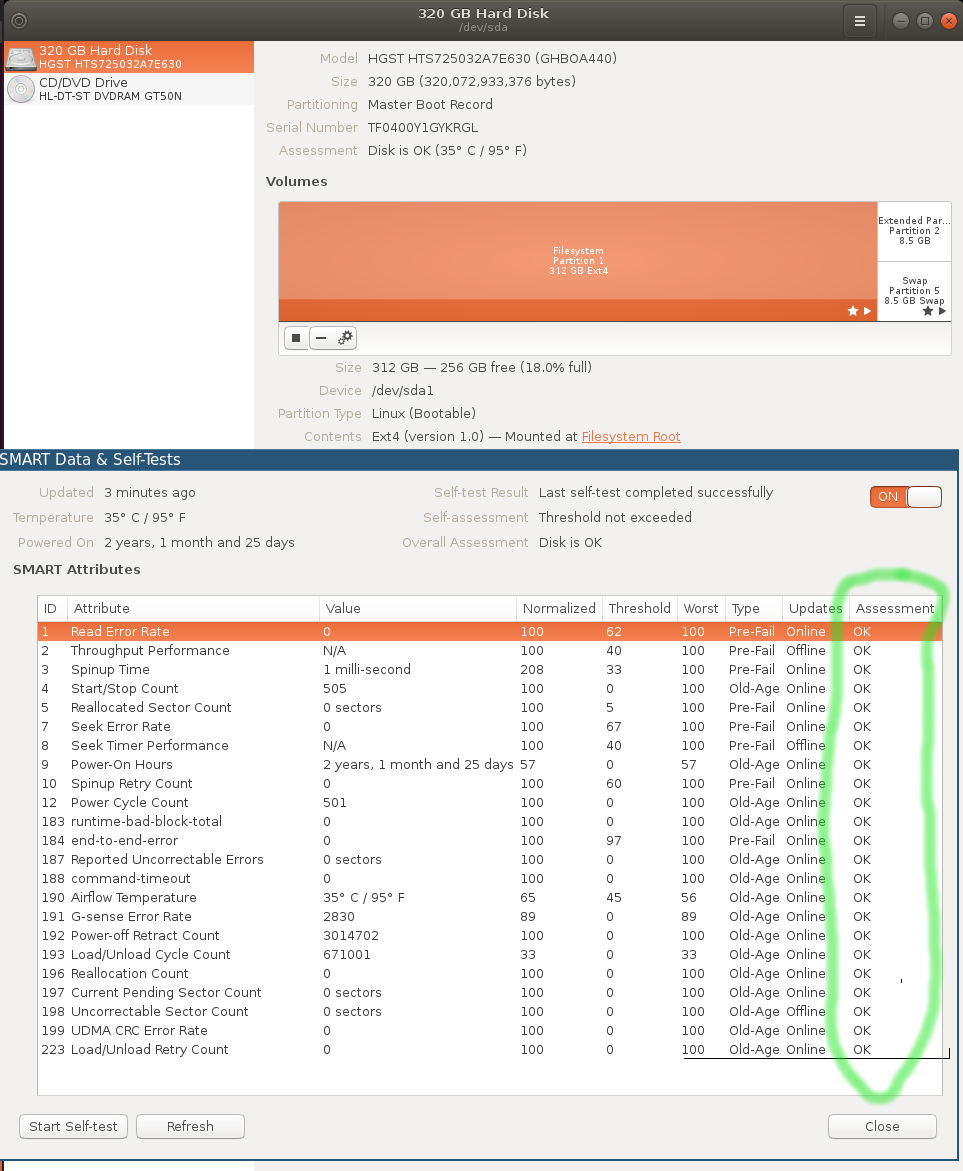 There's plenty of videos on youtube for that. I asked a question about that but didn't do anything in addition to the above checks.

I noticed some very mild flickering on my screen while watching youtube videos and after establishing it was not Chrome-related (as Firefox exhibited the same behaviour), I decided to install additional drivers and upgrade the kernel. In retrospect I don't believe these two measures alleviated the flickering (at least not markedly). At any rate it is borderline imperceptible so I didn't pursue this issue much further.

… by following the instructions given here as follows (mutatis mutandis): Basically, download the packages you need from here and install them using sudo dpkg -i *.deb. I connected an external monitor and verified that the system works as expected with either of the two monitors or both of them turned on. I used xrandr to selectively direct the output.

NB: be sure to execute this step first

Apparently a number of Lenovo laptops (thankfully not the one I purchased) are equiped with faulty Panasonic batteries (local printed copy here).

So, you might want to check that as well. The following incantations provide helpful information:

… in my case the fwts results weren't stellar but I decided to keep the battery (life's too short, one can't afford to get lost in rabbit holes all the time). As a matter of fact I have actually already encountered one case where the battery wasn't charging even though the laptop was plugged-in (this was solved by a full shutdown of the machine and a restart so I let it go at that). This was uneventfull.

I installed Node 6 (Node 7 is still in active development) and npm by following the offical instructions and simply doing:

… which resulted in the following situation in my system:

Apparently there was a problem with these instructions in the past but now they are working fine — see my comment on this answer.

To install the Java SDK I followed these instructions which instructed me to add this PPA. Basically, the following is all I did: After the above stanza I had:

I installed PostgreSQL out of the official Ubuntu repo simply using:

The version installed was 9.5.5 as evidenced by:

You may run the above incantation fresh out of the install without changing anything provided ofcourse you have sudo privilleges.

I verified that the UNIX user postgres was locked as it ought to be:

Following the above, I edited the file pg_hba.conf (in the above) location to contain the following (so I can run my create database / drop database scripts with no hassles):

NB: the above is slightly different than what is written here as I changed the method to trust for the postgres user as well. Ant was installed uneventfully from the sources:

I decided to built Ivy from the sources so that I might be in position to insert some logging code in case I encounter any difficult to resolve problem.

I installed IVY by following the instructions (to build from sources) on this page and doing:

… otherwise if you fail to check out the stable 2.4.0 tag, then the master branch version 2.5.0.alpha will be built. To install TrueCrypt on Ubuntu 16.04 you also need: dmsetup is now no standard application, so you must install it explicitly (source). Just follow the instructions given here