Wise sayings on software subjects that can be applicable in deliverables, presentations, arguments etc.

history of the evolution of Internet and IPv4 / IPv6

on the need to rewrite software from time to time

Code rots, even the best code rots, because the people and cultural environment that the code was written under change and fade away. Refreshing it occasionally, even if it isnâ€™t improved in a significant way, is one way to deal with that rot. Even if the product/library/framework never changed much, rewrites would still be necessary to keep it going as new generations of programmers shuffle through. Otherwise we wind up with a [...] dystopian culture of software archeology.

The style of programming change a bit with good inference, because you dont use types of arguments to document your code, or specify a behaviour or abstraction. You can create simple functions and compose that, because is not verbose and safe checked at compile time.

We see a mostly linear progression for the JavaScript community from the days of plain scripts, to adding module systems, to adding compilers, to adding type systems. source

Adding a single feature means that you have to figure out how it is going to play with all the other features. That makes the cost of implementing the N+1 feature closer to N than to 1. … Indeed, these two kinds of complexity feed off each other. If essential complexity growth is inevitable, you want to do everything you can to reduce ongoing accidental complexity.

Failing abstractions (or why if thou gaze long into an abyss, the abyss will also gaze into thee)

When people try to fix all the leaks in an abstraction, this usually turn the abstraction into an ugly twin of the stuff it tried to simplify. ORMs are a good example of that.

Noticing how these pockets of complexity lead to those kinds of problems isn't obvious or intuitive, because it's effectively a Butterfly Effect that causes most of its severe repercussions much further down the line.

YAML has more complexity in syntax, but a data model that fits to data structures in programming languages (records/maps, arrays/lists, integers, floats, boolean, bytes, strings). As long as you do not implement a YAML parser yourself (why would you do that?) you should have easy times with YAML. XML on the other hand is relatively easy to parse, but has a complex data model that maps well just to a DOM. For anything but markup text, you do not have a direct mapping to/from XML.

A Rube Goldberg machine is a deliberately over-engineered contraption in which a series of devices that perform simple tasks are linked together to produce a domino effect in which activating one device triggers the next device in the sequence.

You keep saying "hand rolled framework" while the thing being discussed is a basic factory, I have to wonder if you know what a "framework" is as well. The scenario you describe simply doesn't exist. I "hand roll" my wiring precisely because my projects are big and modular, and I need the control inverted to the application boostrap and not scattered around in vague XML files and annotations.

I write this code because I realize it's the most important aspect of my application - the logic that hooks the parts into a whole exactly as I need and not by random happenstance and type name matching.

When you have a project that largely consists of reusable modules, it's not a smart idea to embed project-specific configuration in annotations on supposedly project-neutral components, don't you think? When you use annotations and autowiring in Spring, do you realize the very point you seem to stress about, namely inversion of control, gets the knife? Annotations represent inversion... of inversion of control. Information that should be specified outside the object is instead embedded back on it, same as would be the case if you directly instantiated dependencies inside it, or fetched from a global service locator. Spring doesn't assist IoC, in fact it provides tools which quickly and swiftly destroy it.

Ever needed empty "tag" classes and interfaces? Or qualifier annotations? Tell me, how does this fit into the whole "the object is not aware of its environment" concept of IoC. With qualifiers, it seems that the object is painfully aware not just of the existence of a container, but also how is that container configured exactly with qualifiers. This is no IoC.

What follows is a nice, consise and accurate typology definition of otherwise well-known concepts:


The gist is that unit tests are fast and chep, recorded UI tests (e.g. with Selenium) slow, brittle and expensive. Use an intermediate layer of testing just below UI (subcutaneous tests) to avoid having brittle UI tests: 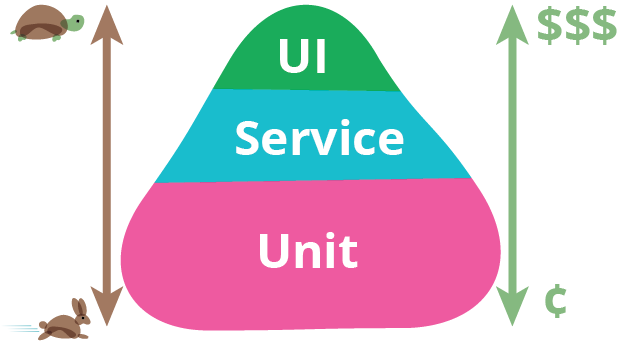 Let f be a type transformation and let S (super) and D be types. Further, let ≤ be the subclass relationship such that D ≤ S signifies that the derived type D is a subtype of the S type.

Given the above definitions, we say that the transformation f is:

For a contravariance example in Java see here.
For invariance and covariance see my playground project here.

There is a practical consideration worth keeping in mind with names: they distinguish variables, functions and classes from each other. As somebody said:

Why JAXB is an unreliable technology

This unresponded, un-acknowledged bug report of mine from more than two (2) years ago should suffice to convince all impartial observers: JIRA.
I created the JIRA bug report in frustration after this SO post of mine.

DEBUG
Log everything important with DEBUG level (but it shouldn't be too much, don't log 10MB data for each HTTP request).

INFO
Log everything that happens in the system at a "higher" level with INFO level (like "add record with text {}").
WARN
Log everything unusual with WARN level (like user validation failed). Log every unexpected but recoverable (application can serve other requests) error with ERROR level.
FATAL
Log unrecoverable error with FATAL level and shutdown application. Works fine for me.
TRACE
And TRACE level just for debug, it's usually turned off, so it might produce any amounts of data.

Data Flow Analysis as a tool in understanding a domain

2016-02-05 source
Data-flow analysis was a method that was swept away (somewhat unfairly) on the grounds of being too procedural and not OO. One of its key tenets was that once you had discovered the essential flows and interactions, you should discard the problem-space partitioning that helped you find the graph, and use the graph to partition the solution space (which might well result in the same partitioning, but not always.)

XML is bad for distributed systems

2006-11-17 source
Dumb things about XML for distributed systems I've been reading a lot of REST vs SOAP falderall lately and it's getting tiresome. Well, some of it is interesting, like looking at whether Bloglines is REST. Anyway, I thought I'd point out the cowman and the farmer can be friends, at least when we both are discussing the smell of the fertilizer. So, four dumb things about XML as a wire format for distributed systems:

Why SOAP sucks for interoperable systems

2013-09-27 source
Why SOAP really sucks and is a bad choice for interoperable systems. The promise of SOAP and WSDL was removing all the plumbing. When you look at SOAP client examples, they're two lines of code. "Generate proxy. RPC to proxy." And for toys, that actually works. But for serious things it doesn't. I don't have the space to explain all the problems right now (if you've seen my talks at O'Reilly conferences, you know), but they boil down to massive interoperability problems. Good lord, you can't even pass a number between languages reliably, much less arrays, or dates, or structures that can be null, or... It just doesn't work. Maybe with enough effort SOAP interop could eventually be made to work. It's not such a problem if you're writing both the client and the server. But if you're publishing a server for others to use? Forget it. The deeper problem with SOAP is strong typing. WSDL accomplishes its magic via XML Schema and strongly typed messages. But strong typing is a bad choice for loosely coupled distributed systems. The moment you need to change anything, the type signature changes and all the clients that were built to your earlier protocol spec break. And I don't just mean major semantic changes break things, but cosmetic things like accepting a 64 bit int where you use used to only accept 32 bit ints, or making a parameter optional. SOAP, in practice, is incredibly brittle. If you're building a web service for the world to use, you need to make it flexible and loose and a bit sloppy. Strong typing is the wrong choice. The REST / HTTP+POX services typically assume that the clients will be flexible and can make sense of messages, even if they change a bit. And in practice this seems to work pretty well. My favourite API to use is the Flickr API, and my favourite client for it is 48 lines of code. It supports 100+ Flickr API methods. How? Fast and loose. And it works great. To be fair, SOAP can be forced to work. Using SOAP didn't really hurt adoption of the APIs I worked on. But it sure didn't help either. So what's the alternative? I'm not sure. Right now I'd probably go the HTTP+POX route while trying to name my resources well enough that the REST guys will invite me to their parties. But XML itself is such a disaster and AJAX is starting to show the cracks in HTTP (like, say, the lack of asynchrony).

2013-09-26
Not to mention the fact that unit tests can only help with verification - i.e. that you have built the software to expectations and to catch regressions. I would say that 90% of the grief I have experienced building applications is the validation part - that you are actually building the right thing.


On productivity and estimating software schedules.

2013-09-19
The difference in programmer productivity can vary by a factor of 80 - (really it's infinity, because some programmers *never* get some code right, so the factor 80 discounts the totally failed efforts) - So given a productivity factor you have to normalize it by a factor that depends upon the skill and experience of the programmer. There are people who claim that they can make models estimating how long a software projects take. But even they say that such models have to be tuned, and are only applicable to projects which are broadly similar. After you've done almost the same thing half a dozen times it might be possible to estimate how long a similar project might take. The problem is we don't do similar things over and over again. Each new unsolved problem is precisely that, a new unsolved problem. Most time isn't spent programming anyway - programmer time is spent:
e) is actually pretty easy once a) - d) are fixed. But most measurements of productivity only measure lines of code in e) and man hours.

201X-00-00
It is not usually until you've built and used a version of the program that you understand the issues well enough to get the design right. —Brian Kernighan, Rob Pike, The Practice of Programming

ORMs start easy and simple, but lack various features of full SQL. If you start a new project, the ORM is fine. At some point, you are forced to use plain SQL, which clashes horribly with the ORM concepts. Thus the desire to extend the ORM. Over time more and more features are bolted on and the complexity grows.

This is dead on. Human beings invented symbolic language because it's simply more expressive than pointing and grunting. CLIs are superior to GUIs for the same reason.