I followed the below workflow recently:

Following the above I also did:

… whereupon I got the following message:

This is supposedly useful when I also have commits in my local repo that I haven't pushed for a while while the collaborator has pushed his commits to github. Rebase also results in a linear history in contrast to merge. That was the theory at least; I tried that circa September 2020 and it didn't work too well …

NB: there should be no slash between origin and master

So failing the above I had to resort to the familiar:

In both cases you obviously still have to deal with the merge conflicts.a

To edit the checked-out branch's description:

In a recent rebase operation (where I was following the script given here), I had the following output:

Following the advice given in the linked source I did the following:

If the "other" branch is "master" you can do a:

(the operation is obviously commutative)

The following can also serve to graphically show the branch point:

Based on the example above, to see the changes made in FileB.java in the commit fc847cb (only) you can do:

To see the changes of a particular file over a number of commits you just provide the range of the two commits (beginning commit and ending commit). E.g. to see how file FileA.java changed between commits 12347dd and fc847cb do:

Alternatively, the following also works: Instead of commit numbers you may use HEAD (for the tip of the current branch) or a branch name (in which case the tip of that branch is used)

To see all changes (including unstaged ones):

To see only up to staged changes:

Notice that in the above it is an error to give HEAD after the --staged as HEAD is implicit.

To see up to the tip of the current branch:

Based on this and this, I am now resolved to using the following workflow:

Note that git will bark at the branch delete command if it thinks it's not fully merged so no worries. source

Say you branched off from master at some point in the past and you are now in a branch for a cool new feature. Given that in the meantime (i.e. since you branched-off) the master branch has also advanced doing (from your feature branch) the following:

To actually only see differences since the point you branched off from master (and not to bother with subsequent master commits), you need to do (from your feature branch):

Note that there is no space between master and ... source

This will stash all modifications that you did not git add:

Note that newly created (and non-added) files will remain in your working directory unless you also use the -u switch.

Also, your working directory must be clean (i.e. all changes need to be added) when you git stash pop later on. source 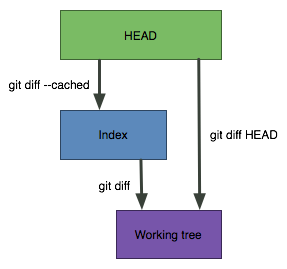 Assuming you've cloned your repository with git clone --recursive (which you always should), then do a:

This is the first step in case you remember a few things about the file's name but have forgotten it's full path (which is necessary for the next step): This will be the last one (hence we are using the -1 flag below): To perform the resurrection use the previous commit than the one that deleted the file (hence the ^):

The gist of the idea is to create an orphan gh-pages branch which will include only the HTML pages you wish to publish, and then push it to the origin:

… following the above steps it may take a couple of minutes before your site becomes visible in:
https://<your-github-id>.github.io/<repository-name>/dir/to/some/index.html

source Execute a command like the following from the toplevel of the working tree: The last argument is the path in which the submodule should reside. NB: obviously people that have already cloned the repo (prior to the addition of the submodule) would still have to do: Otherwise (i.e. if the cloning happens after the addition of the submodule it is better to just do: (see how to clone a repo including the submodules). source E.g. to view history on single file: The following has worked for me once: source. original article hacker news discussion so
quick and dirty: long and clean: - consumed in my git-show-files script (in ~/tools) (based on the general instructions)

add the following contents to the ~/dummy/.git/config file: (nothing should be added)

NB: particularized instructions here.
The instructions on this page worked well. Copied below in case the source goes off line:
Create the subversion repository in the usual way, using svnadmin.

Once you've got an empty repository to point to (we'll imagine it's at http://svn.example.com/foo), you also need to commit an initial version (I also created a trunk directory in this step, in case we later decide to mirror branches too):
Once this is done, you can throw away the directory you checked out of subversion.

Set up the subversion remote
This step, and subsequent ones, need to be performed on whichever git repository you want to mirror from.

In our case, we have a central repository running on a local installation of Gitorious. This is a bare repository, which makes things a little tricker, as git-svn requires a working copy. To get round this, we create a clone, which we’ll use as an intermediate step in the mirroring process. If you're not mirroring a bare repository, you can omit this step.


Now add the following to .git/config (with the correct svn URI, of course): Now do an initial fetch of the empty subversion remote, and check it out as a new git branch (called svn): You can now merge in all your commits from master, and push them to subversion. You’ll probably want to go and make a coffee or something while the dcommit runs – if you haven’t used subversion for a while you’ve probably forgotten just how much slower it is than git. To allow pushing to svn from master, rebase master to the svn branch (which can then be deleted): At this point you should be able to manually update subversion at any time by running git svn dcommit from the master branch. There are two ways:

(in the above example all changes between identified commit and the tip of the branch will be reported) I suspect the tags in the following can be any tree-ish objects:

The git-format-patch method produces cleaner output. The following is the 'safe' version (echo):

This, and many other commands are available at /usr/lib/git-core

In the incantation above 'visualization' (i.e. the branch name) is a tree-ish object in git. The general signature of git checkout is therefore: to just see which files will be deleted by git clean do a dry-run: do a: source Assuming you are sitting on that commit, then this command will wack it... The HEAD~1 means the commit before head. Or, you could look at the output of git log, find the commit id of the commit you want to back up to, and then do this: If you already pushed it, you will need to do a force push to get rid of it... However, if others may have pulled it, then you would be better off starting a new branch. Because when they pull, it will just merge it into their work, and you will get it pushed back up again. If you already pushed, it may be better to use git revert, to create a "mirror image" commit that will undo the changes. However, both commits will both be in the log. FYI -- git reset --hard HEAD is great if you want to get rid of WORK IN PROGRESS. It will reset you back to the most recent commit, and erase all the changes in your working tree and index. Lastly, if you need to find a commit that you "deleted", it is typically present in git reflog unless you have garbage collected your repository. comment: HEAD~1 or just HEAD^. If you pushed, you should use git revert instead